When rectum of healthy person gets filled with stool, nerves in rectum sends messages to brain and one feel the urge to have bowel movement. If one finds a socially appropriate place and decides to have bowel movement then messages from brain travel through spinal cord to the bowel and sphincter muscle. The sphincter muscle relaxes and let stool pass through it. But if it is not proper time and place, brain tells the sphincter to remain close and hold the stool until one finds a proper place.

After spinal cord injury as messages don’t flow from body to brain and vice-versa, due to blockage at injury site,  one faces a dilemma. Neither can one feel the urge to have bowel movement nor can one keep the sphincter close to prevent untimely stool passing through it. So a proper planning, thinking and timing is needed to prevent untimely passing of stool and to acquire bowel movement in a proper routine and time so that one can live a healthy and graceful life. This all process is known as neurogenic bowel management program. 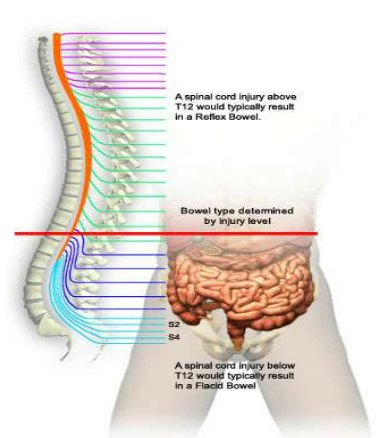 The uncontrolled bowel after spinal cord injury is known as neurogenic bowel. It has two types

In spinalcord injury above T12 the neurogenic bowel will be reflex bowel . Although signals from rectum do not reach the brain and one doesn’t feel the urge to have bowel movement but the spinal cord helps in bowel movement and passing stool by creating a reflex known as defecation reflex . After passing stool sphincter will stay  close. It is also called bowel movement in upper motor neuron.

If the injury is below T12 the defecation reflex is not produced and sphincter will not stay tight . Such kind of bowel is called flaccid neurogenic bowel. To prevent undesired and untimely flow of stool more planning and hard work is required in flaccid bowel.

What is a suppository?

Suppository is a very useful drug for bowel management after spinal cord injury. It is inserted in rectum and it works by stimulating nerves of rectum or drawing water into rectum and initiating stool passing. Usually after inserting it takes from 5 to 60 minutes to work. Different kinds of suppositories are available in market like glycerine suppository, Bullet suppository, Dulcolax suppository.

Individuals suffering from quadriplegia should sit on commode chair every day or every other day. It doesn’t usually happens that stool will pass easily just after sitting on commode chair. Some techniques are required for it. As their neurogenic bowel is reflex bowel so defecation reflex can be stimulated through following techniques.

The first technique is the use of suppository. Suppository should be inserted before transferring to commode chair or after sitting on commode chair.

how long does dulcolax suppository take to work?

It will take from 5 to 15 minutes for the suppository to be effective and cause stool to pass.
Another useful method for quadriplegics to start defecation reflex and pass stool is digital rectal stimulation. As fingers of quadriplegics don’t work so an assistive device can be used for digital stimulation and to be independent in neurogenic bowel management program.

After spinal cord injury, diarrhea can make life very difficult. It not only causes neurogenic bowel accidents but  results in weakness due to emission of important electrolytes like sodium and potassium. It may be caused by excessive use of antibiotics or by consuming unhygienic food. Spinal cord injury individuals should try to consume less spicy and hygienic food.