Wheelchair, a symbol of strength not weakness! 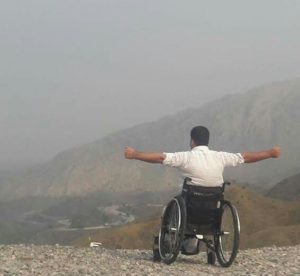 How many times have people in wheelchair been treated with sympathy and pity?

But if you  go a bit deeper and study their lives, you will find some amazing qualities to be learnt from them. You will find stories of no surrender in battle against adversity and will find wheelchair being a symbol of strength rather than weakness.

People get confined to wheelchair because of some sort of disability, inability to walk. They get it either by birth or because of some accident causing spinal cord injury. You may see wheelchair users doing job, running business or pursuing education etc .

For a healthy person these all activities may be normal but in case of wheelchair user there is a great story of courage, resilience, hard work, optimism and above all positive thinking behind it.

How many times have they acted patiently and positively when underestimated or discriminated?

In my side of the world, environment is full of barriers and nothing around them is accessible but that doesn’t stop them from pursuing their dreams and achieving their goals.

Let’s have a look at few qualities or virtues that are found at utmost in active wheelchair users:

Those active wheelchair users that are disabled by birth are actually champions by birth. They had to show a lot of mental power and stamina to cross all  obstacles in life in the form of environmental and social barriers,  to prove their selves and achieve success.

Majority of those that are in wheelchair because of spinal cord injury got disability at the prime of their age and health. They were like a bird that was flying high but fell on the ground with wings and legs broken. Getting up after such a fall and bearing pain and adversity with such a courage needs a great deal of fortitude. So the first virtue one can learn from active wheelchair users is fortitude. Synonyms of which are grit and guts.

When your body is caged and confined to wheelchair after spinal cord injury, life will no more be a walk in the park like before. You were young ambitious and in pursuit of dreams but the injury changed everything. You tell yourself that it’s  will of God. You are not alone and He is always there to help. You believe in your abilities and tell yourself that no problem if it’s a matter of reaching destination you will use wheels instead of legs. So faith in God and and trust in self abilities is the second virtue found at utmost in wheelchair user.

Hope has played a great role in success of active wheelchair users and its the third virtue that can be learnt from them. As a child he started wheeling instead of walking. He always hoped for better tomorrow and continued his struggles. The story of another one who came on wheelchair accidentally because of spinal cord injury is also full of hope. Hope gave him strength to fight against all the odds and start active life again.