Spinal cord injury is not just a phenomenon of not being able to walk and getting yourself confined to wheelchair but it’s a complete package of problems. Not only can you not feel and move any part of your body below injury but you also have to cope with a lot of medical complications like spasticity, uti and autonomic dysreflexia etc. Add to that different kinds of barriers in environment that discourage you from getting active in life. One of the biggest problems that wheelchair users face in Pakistan is transportation. Unfortunately there is no concept of accessible transport. Busses, trains etc nothing are accessible. Because of inaccessible transportation many disabled children are unable to go to school, many spinal cord injury victims that were doing some sort of jobs before injury are unable to rejoin jobs and thus leaving many confined to their homes. But there is one person who has found solution to this problem. He is a paraplegic himself and his name is Asif Anis.

Mr Asif Anis is a certified physiotherapist by profession. He lives in Karachi. In 2004 his life changed 360 degrees when he was passing by an under construction building. A piece of metal fell on him, broke his back and resulted in spinal cord injury thus leaving him unable to walk and confined to wheelchair for the rest of his life. He accepted his new style of and started working on getting independent in life. He worked on strengthening his upper body to be able to do daily tasks of his life like transferring between wheelchair and bed etc. Being a paraplegic and with his lower body to stay paralyzed for the rest of his life strengthening his upper body was the key to his independence.
Towards the goal of independence big problem in front of him was transportation. He could hardly see any wheelchair accessible vehicle even in the big city of Karachi. Should he surrender to his fate and live the rest of his life aimlessly and restricted to his home because of lack of appropriate transportation? “No” was the answer that raised powerfully inside him. How often have we heard the proverb “Necessity is the mother of invention “ and Asif Anis is the perfect practical example of it. He decided to make his own vehicle. A vehicle that is according to his needs and on which he could travel independently and gracefully.
After 9 years of hard work Asif Anis was able to make the first wheelchair accessible bike of Pakistan. The bike gave him a lot of freedom and independence in life. He could now travel any where any time with his bike and the most beautiful thing was that he could drive it from wheelchair. A press of button would lower a portion from back of his bike making ramp for his wheelchair. He could then climb the ramp and reach the driver’s portion of his bike. Press of button again would raise the ramp. He could then drive it and go anywhere and get in and out of the bike using the same procedure.

Looking at the advantages of his wheelchair accessible bike, he decided to make more bikes for others wheelchair users also. Up till today he has made many bikes in different colors, designs and engine capacity. Many wheelchair users from Khyber to Karachi are using his bikes and enjoying the freedom to go anywhere for any purpose like pursuing education, doing business, doing jobs or moving around for having fun and visiting beautiful places.

If you have spinal cord injury especially of higher levels then getting in and out of car can be a big problem. Quadriplegics require two individuals to go inside car or come out. After getting inside car carrying along wheelchair can be a big headache and if the wheelchair is electric and heavy then the task will become further difficult to the extent of impossible. So Asif Anis’s bike basically solves two basic problems for all wheelchair users. First you don’t have to transfer to other seat to drive the bike which can be a big advantage for individuals suffering from high level spinal cord injury. Second as you will be having the advantage of driving the bike from your own wheelchair so you don’t have to worry about folding and unfolding wheelchair and carrying it along. You can even drive the bike from heavy electric wheelchair.

Currently Asif Anis is working on some more designs of wheelchair accessible bike one of which is for those quadriplegics which have arms strength but no fingers movements or gripping power. I am myself quadriplegic of C6 level. I can drive my automatic car with specially designed hand control but the big problem that I am facing is getting into the car plus I cannot carry my electric wheelchair along with me in which I have comfortable seating. I along with some other quadriplegic friends are waiting eagerly for the new design of wheelchair accessible bike to be launched and add easiness and independence to our lives.
So far Asif Anis has done this wonderful work all at his own without government support. Imagine what wonders he would be able to do if he get some sort of government support. Wheelchair accessible bike manufacturing on larger scale is need of the day to solve transportation problem of wheelchair users. Best of luck and progress to Asif Anis to continue his amazing work in more powerful manner. 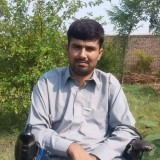